The time is here for Safemode to launch their own coffee brand!

While waiting for some new music from Safemode, put on Gold Digger, take a sip of our coffee or espresso, and join the other people behind the scenes!

To make this easier we launch two new perks:

ENJOY and THANKS for your support!

Today Sweden Rock announced that Safemode will be one of the bands performing at this year’s festival in Sölvesborg. The band hopes to expand their fan base among listeners to artists like Def Leppard, Toto, and Mötley Crüe.

Earlier today, Sweden Rock announced that Swedish metalcore-band Safemode, will be one of this year’s bands participating at the Sweden Rock Festival in early June.

“We were in the middle of recording our new album with associated crowd funding campaign, when we got the request to perform at Sweden Rock.” says singer Tjet Gustafsson and continues: “These past years we have mostly toured abroad, which makes it even more fun to play at a major festival in our own country.”

[Download the whole press release here: In English / In Swedish]

February 14, 2015 // Do you want to hear new songs from Safemode in 2015? Here is your chance to make it come true! We got some really great new songs. Two studios are booked, and a great producer is ready to start recording. Now, we need your help to make this happen. Help us record our brand new album!

We’ve got some really cool perks. What about having Safemode writing a personal song to you, based on your life? Well, here is your chance!

Thanks a lot for all your support! We love you!

The band wishes to thank the listeners and RadioU for all support!

November 11, 2014 // Safemode just got home safe, after 20 hours of driving the last 2 000 kilometers from The Netherlands via Germany and Denmark.

The band performed at the festivals Blast Of Eternity in Neckarsulm, Germany, and Brainstorm Fest in Apeldoorn, The Netherlands, among other bands like War Of Ages (US), Crimson Moonlight (SWE), and many more.

Here you can watch the trailer from the tour: 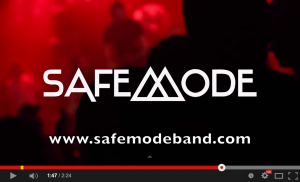 (Safemode will be back in Germany for Christmas Rock Night in December.)

October 30, 2014 // Safemode is heading to Germany and The Netherlands in the beginning of November, and will bring two brand new t-shirts (limited edition) for this tour!

Check them out and order here. (Orders will be shipped after the tour, from Tuesday November 11th.)

In September 2014 Swedish metalcore-band Safemode, signed an exclusive booking agreement for the US with Mosaic Artistry Group.

Aaron Dill, lead booking agent at Mosaic Artistry Group, found out about Safemode by hearing their songs on the radio. The single “Another Day Will Haunt You” from the band’s latest EP “Gold Digger” was picked up by RadioU and quickly found success in the states, lasting for weeks at the top of their top ten most wanted charts and is in heavy rotation. He wanted to follow up the momentum of their radio success, so he reached out to them and put together a plan to bring their energetic live show to the United States…

[Download the whole press release here: In English / In Swedish]

May 21, 2014 // Safemode’s drummer, Johannes, will be attending RadioU’s The Riot Live YouTube event on Thursday night 9 PM ET. All you RadioU fans better not miss this!
https://www.youtube.com/watch?feature=player_embedded&v=5kmU68d2Dmw